I've spent a lot of time over the years contributing to and reviewing code changes to open source projects. It can take a lot of work for the submitter and reviewer to get a change accepted and often they don't make it. Here are the things in my experience that successful contributions do.

Use the issue tracker. Having an open issue means there is always something to point to with all the history of the change that wont get lost. Submit patches using the appropriate method (merge proposals, pull requests, attachments in the issue tracker etc).

Sell your idea. The change is important to you but the maintainers may not think so. You may be a 1% use case that doesn't seem worth supporting. If the change fixes a bug describe exactly how to reproduce the issue and how serious it is. If the change is a new feature then show how it is useful.

Make your change as small as possible. Put yourself in the mind of the reviewer. The longer the patch the more time it will take to review (and the less appealing it will be to do). You can always follow up later with more changes. First time contributors need more review - over time you can propose bigger changes and the reviewers can trust you more.

Read your patch before submitting it. You will often find bits you should have removed (whitespace, unrelated variable name changes, debugging code).

Be patient. It's OK to check back on progress - your change might have be forgotten about (everyone gets busy). Ask if there's any more you can do to make it easier to accept.

Posted by Robert Ancell at 10:13 am No comments:

I've just released my fifth application for the Ubuntu phone and I thought I'd do a write up of my experiences developing for Ubuntu Phone. In summary, it's been pretty positive!

The good:
The bad / ugly:
Here's what I've made; all these applications are released under the GPL 3 license and available on Launchpad. You can get the source for any of them by typing "bzr branch lp:euchre" from an Ubuntu machine. 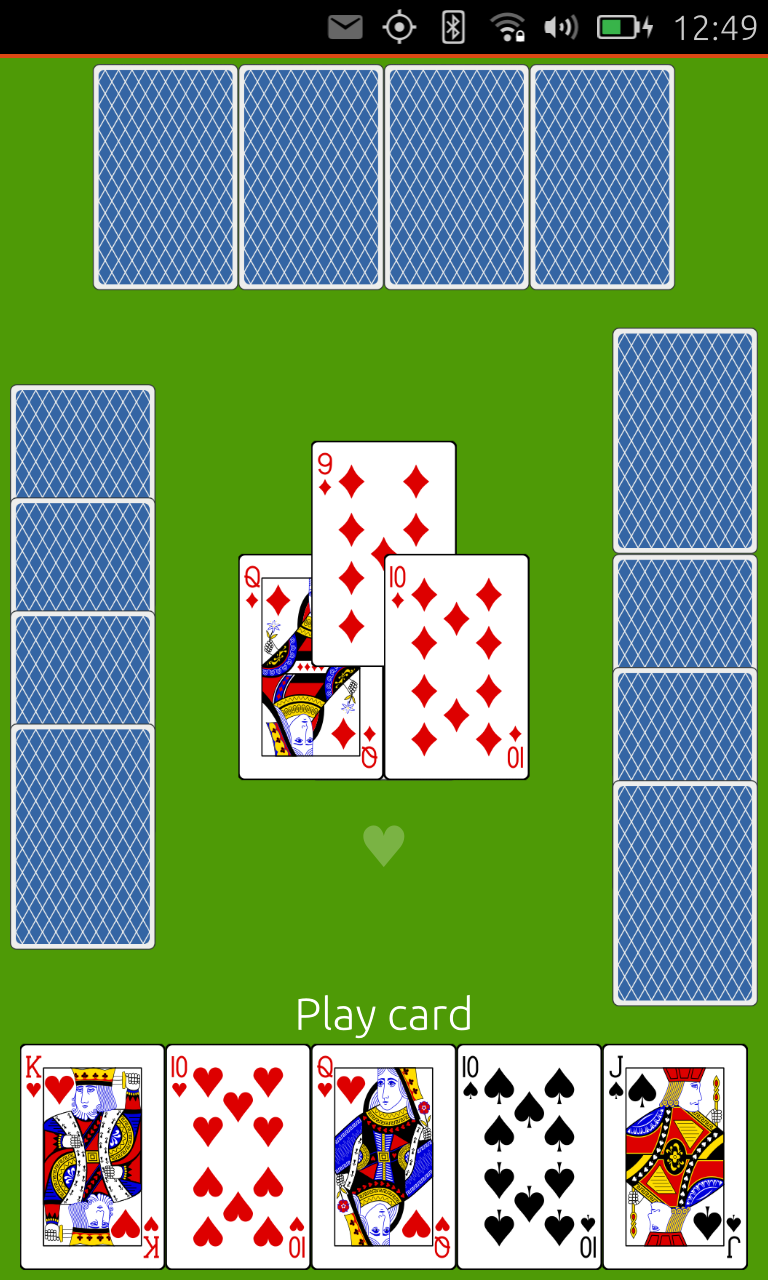 My first Ubuntu phone application. It's a classic four player trick taking card game with a basic AI.  I learnt a lot about animation in QML developing this. It's all written in Javascript which is really pushing the limits of maintainability for an application like this (1833 lines of QML). While it is the oldest it is also the least downloaded of my applications I think because Euchre is a bit of a niche game and I don't have any in game help. 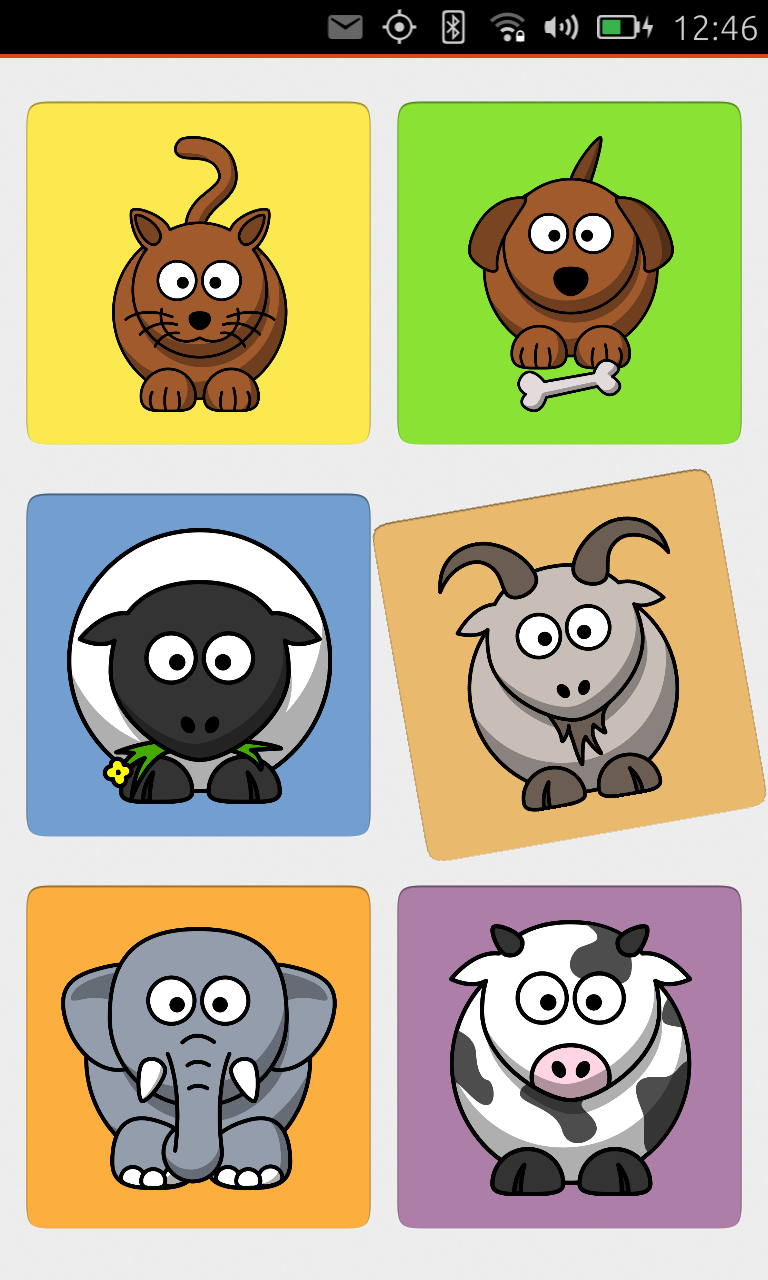 The inspiration for this was my daughter enjoying applications like this on Android. You touch the animals and they shake and meow / baa etc. It's trivially small (157 lines of QML). 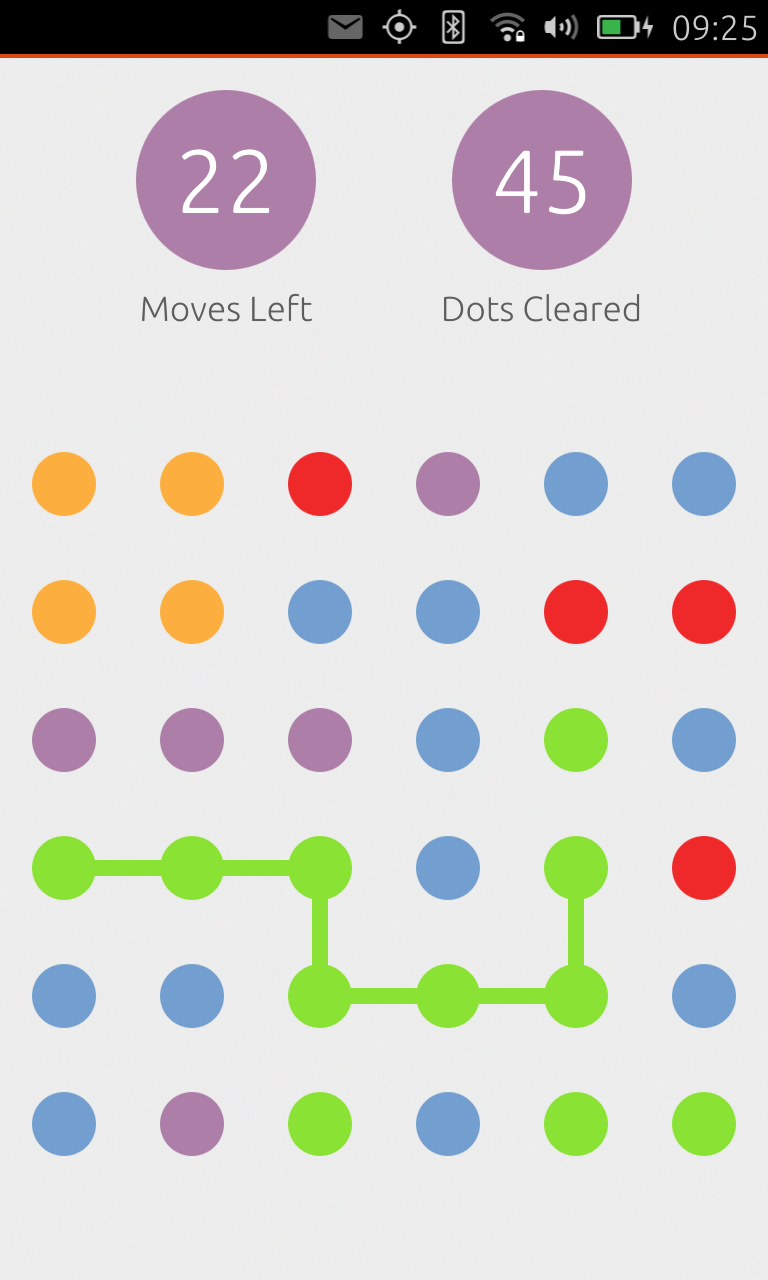 Dotty is a clone of the very successful iOS / Android game Dots. I thought I'd see if copying a popular game would transfer into success in Ubuntu and it has. This is my most popular game with 362 users currently compared to 160 for Animal Farm which is the next most popular. I learnt how to do dynamic components (i.e. the lines and the dots falling down) with this. A good size at 605 lines of QML. 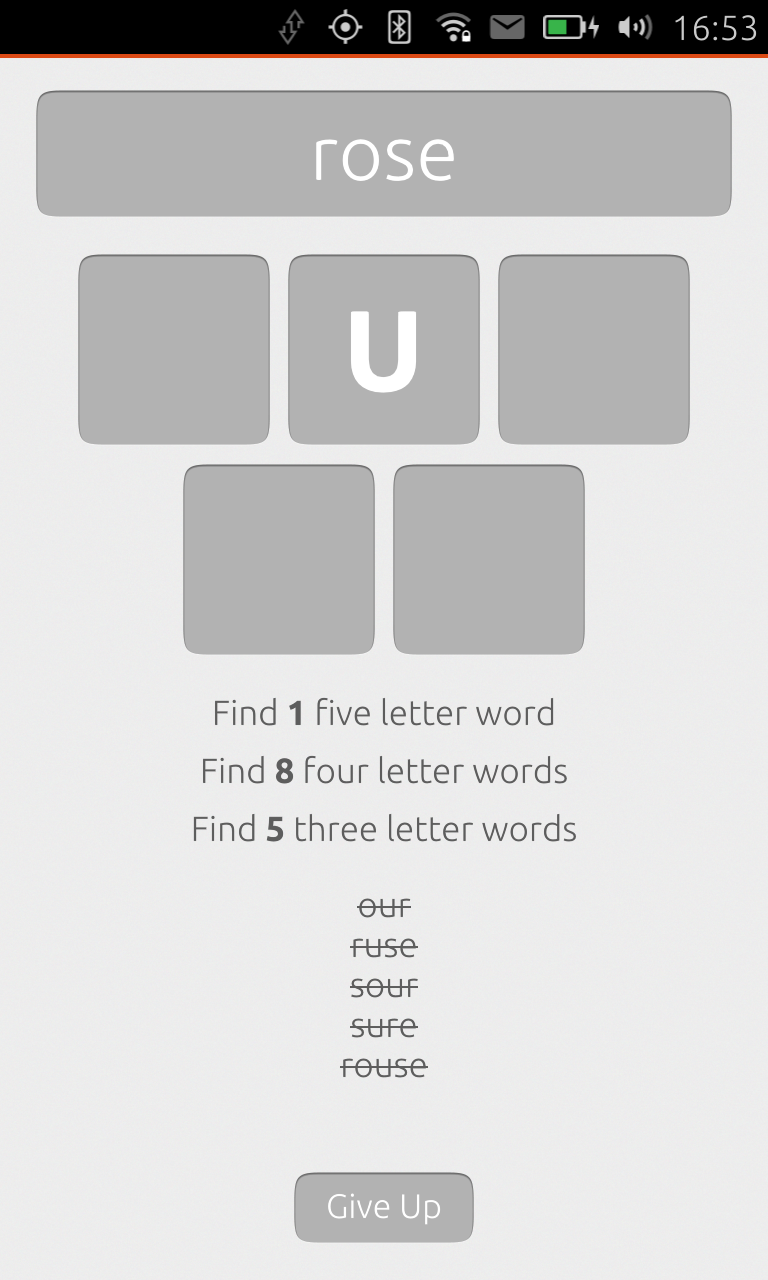 Like Dotty I was looking for the type of games that are already popular on existing platforms. Word games are quite successful and I was thinking of games like 7 little words when designing this. The "making words from five letters" is a common newspaper game. I spent a lot of time trimming the dictionary of possible games to remove anything offensive or obscure so it should be reasonably possible to solve all the puzzles (there's about 1300 of them). 406 lines of QML. 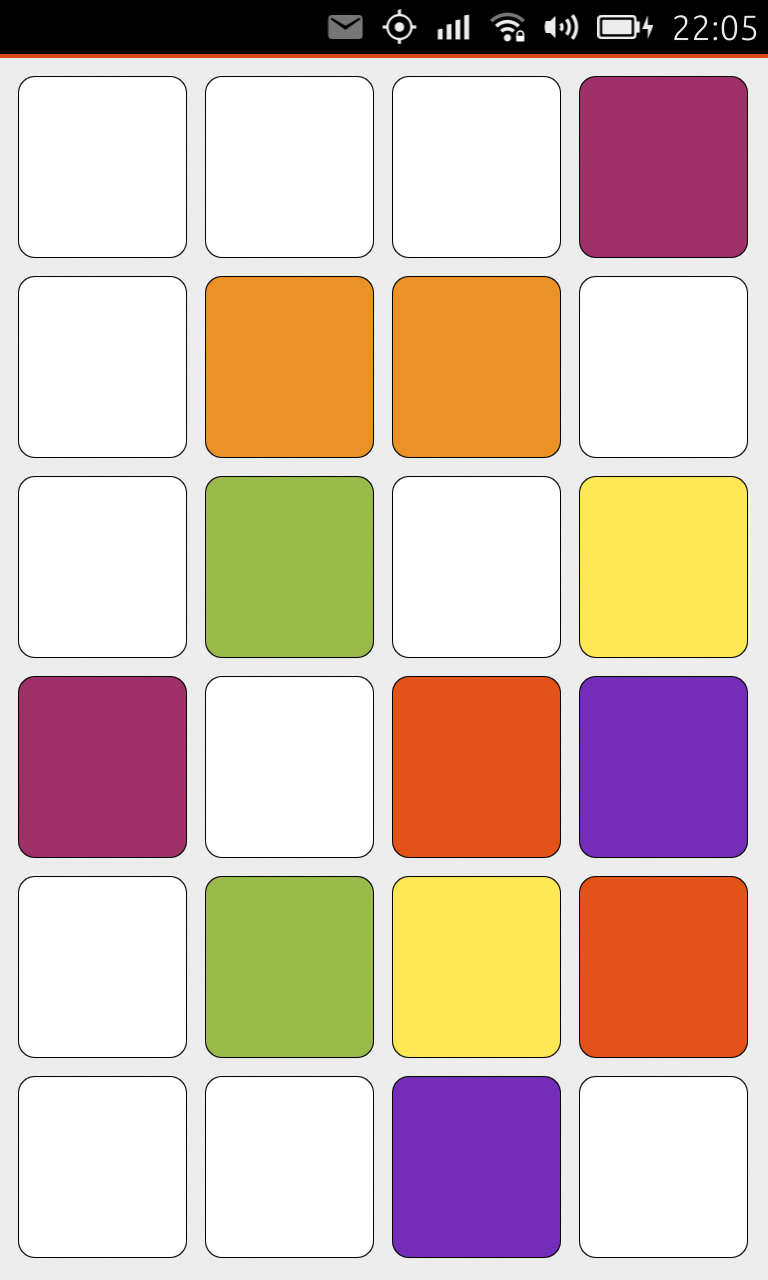 My newest game! Released last night. Like Animal Farm I was thinking of something my children might like to play. You turn over the cards two at a time and try and find the matching colours. The colours I've used actually make it quite difficult and fun to play as an adult. 409 lines of QML.
Posted by Robert Ancell at 10:07 am No comments:

I recently needed to port some code from GTK+ OpenGL code from GLX to EGL and I couldn't find any examples of how to do this. So to seed the Internet here is what I found out.

This is the simplest example I could make to show how to do this. In real life you probably want to do a lot more error checking. This will only work with X11; for other systems you will need to use equivalent methods in gdk/gdkwayland.h etc. For anything modern you should probably use OpenGL ES instead of OpenGL - to do this you'll need to change the attributes to eglChooseConfig and use EGL_OPENGL_ES_API in eglBindAPI.

Posted by Robert Ancell at 9:58 pm No comments:

Ryan Lortie and I have been tinkering away with making getting GTK+ applications to run in Unity 8 and as you can see below it works!


This shows me running the Unity 8 preview session. Simple Scan shows up as an option and can be launched and perform a scan.

This is only a first start, and there's still lots of work to be done. In particular:


If you are using Ubuntu 14.10 you can install the packages for this from a PPA:

The PPA contains a version of GTK+ with Mir support, fixes for libraries that assume you are running in X and a few select applications patched so they show in Unity 8.

The Mir backend currently on the wip/mir branch in the GTK+ git repository. We will keep developing it there until it is complete enough to propose into GTK+ master. We have updated jhbuild to support Mir so we can easily build and test this backend going forward.

Posted by Robert Ancell at 10:09 am No comments:

One of the most useful tools I use is errors.ubuntu.com. This shows statistics for the crash reports that are sent from users machines. Before I would trawl through Launchpad trying to work out which crash reports were more significant. Now we have numbers to see what's important.

Here is a graph showing the crash reports received for the last six releases over the last year:

Some interesting things from the graph:

Posted by Robert Ancell at 12:07 pm No comments:

Why the display server doesn't matter

Display servers are the component in the display stack that seems to hog a lot of the limelight. I think this is a bit of a mistake, as it's actually probably the least important component, at least to a user.

In the modern display stack there are five main components:
The hardware we have no control over. We just get to pick which hardware to buy. The driver we have more control over - drivers range from completely closed source to fully open source. There's a tug of war between the hardware manufacturers who are used to being closed (like their hardware) and the open source community which wants to be able to modify / fix the drivers.

For (too) many years we've lived with the X display server in the open source world. But now we are moving into next generation display servers (as Apple and Microsoft did many years ago). At the moment there are two new classes of contender for X replacement, Mir and a set of Wayland based compositors (e.g. weston, mutter-wayland etc).

Applications use toolkits and platform APIs to access graphical functionality. There are plenty of toolkits out there (e.g. GTK+, Qt) and existing libraries are growing more broad, consistent and stable to be considered as a complete platform API (which is great for developers).

If you read the Internet you would think the most important part in this new world is the display server. But actually it's just a detail that doesn't matter that much.

The result of this is the display server doesn't matter much to applications because we have pretty good toolkits that already hide all this information from us. And it doesn't matter much to drivers as they're providing much the same operations to anything that uses them (i.e. buffer management and passing shaders around).

So what does matter now?
I hope I've given some insight into the complex world of display stacks and shown we have plenty of room for innovation in the middle without causing major problems to the bits that matter to users.
Posted by Robert Ancell at 1:45 pm No comments: