The GCalctool team is proud to announce the second release in the
unstable GNOME series.

The following changes have been made from 5.23.1:

The release is available from:
http://ftp.gnome.org/pub/GNOME/sources/gcalctool/5.23/
Posted by Robert Ancell at 8:09 pm No comments:

After a bit of hacking glChess can run on Windows. The only thing that would take major work is the AIs as they are forked off the main process (fork() is not supported in Windows). But aside from that with a few minor changes and running directly from the source leads to this: 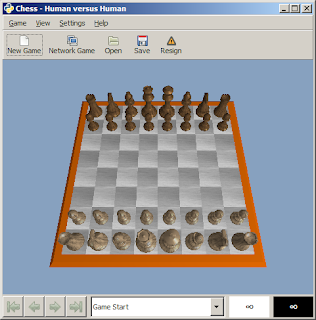 I was very impressed with the quality of the Windows packages for the dependencies. When I tried this about a year ago it didn't appear they were all supported. They are now:

Since my posts are now being amplified by Planet Gnome I should take this time to introduce myself... Hi, my name is Robert Ancell and I am an open-source developer currently active in Gnome Games (particularly the chess game which I started many years ago and was merged into Gnome in 2.18) and I am the maintainer of GCalctool having taken over from Rich Burridge for the 2.22 release (I swear he sneaked that over to me when I wasn't watching ;) ).

In my more pays-the-rent side of life I am a software engineer having come from an embedded background and now working for a large financial organisation in Sydney, Australia. I get into open-source code when I have some spare time which leads to fairly unpredictable progress on projects (actually I normally find I have time after a release so I get a release worth of duplicates before the change is released - now that's Murphey's law!).

My goals for Gnome currently is to get the code I'm working on simpler and more reliable. This goal will inevitable slip when I find some flashy feature to introduce :).

p.s. I don't actually play chess so fear ye all who left me writing the Gnome version!
Posted by Robert Ancell at 1:58 am 2 comments:

After upgrading to Ubuntu 8.04 it appears my automatic bug reporting is disabled. Due to the number of Ubuntu sourced reports coming in for Gnome Games it can't be disabled on everyone's system... So a bit of investigation showed it might be apport. Looking in /etc/init.d/apport showed this was disabled so I enabled that by editing /etc/default/apport and set enabled=1. After /etc/init.d/apport restart I could happily file away a nautilus bug.

But wait a minute... That report went to Launchpad, not Gnome Bugzilla! (Wouldn't it be a nice world in which Ubuntu got the flood of duplicates for the things we fix but they never update </gripe>). It appears apport is only enabled during development so I shouldn't have had to enable it. I figure it is bug-buddy that normally catches bugs and sends to Gnome; is anyone else getting this/know how to tell if the crash catcher is running?
Posted by Robert Ancell at 1:36 am 2 comments: