Along with a number of other Canonical staff I recently attended linux.conf.au 2019 in Christchurch, New Zealand. I consider this the major Australia/New Zealand yearly conference that covers general open source development. This year the theme of the conference was "Linux of Things" and many of the talks had an IoT connection.

LCA consistently has high quality talks, so choosing what to attend is hard. Mostly everything was recorded and is viewable on their YouTube channel. Here is some highlights that I saw:

STM32 Development Boards (literally) Falling From The Sky (video) - This talk was about tracking and re-purposing hardware from weather balloons. I found it interesting as it made me think about the amount of e-waste that is likely to be generated as IoT increases and ways in that it can be re-cycled, particularly with open source software.

Plastic is Forever: Designing Tomu's Injection-Molded Case (video) and SymbiFlow - The next generation FOSS FPGA toolchain (video) - FPGA development is something that has really struggled to break into the mainstream. I think this is mostly down to two things - a lack of a quality open source toolchain and cheap hardware. These talks make it seem like we're getting really close with the SymbiFlow toolchain and hardware like the Fomu. I think we'll get some really interesting new developments when we get something close to the Rasberry Pi/Arduino experience and I'm looking forward to writing some code in the FPGA and IoT space, hopefully soon!

The Tragedy of systemd (video) - It's the conflict that just keeps giving 😭 Benno talked about how regardless of how systemd came to exist the value of modern middleware is valuable. I had thought the majority had come to this conclusion but it seems this is still an idea that needs selling. I think the talk was effective in doing that.

Sequencing DNA with Linux Cores and Nanopores (video) - This was a live (!) demonstration of doing DNA sequencing on the speakers lunch. This was done using the MinION - a USB DNA sequencer. As well as being able to complete the task what impressed me was this was done on a laptop and no special software was required. Given this device costs something around $1000 and is easy to use this opens up DNA analysis to the open source world.

Around the world in 80 Microamps - ESP32 and LoRa for low-power IoT (video) - This discussed real world cases of building IoT / automation solutions using battery power (e.g. solar not suitable). It covered how it's very hard to run a Linux based solution for a long time on a battery, but technology is slowly improving. Turns out the popularity of e-scooters is making bigger and cheaper batteries available.

Christchurch has recently started trialing Lime scooters. These were super popular with a hacker crowd and quickly accumulated around the venue. I planned to scooter from the airport to the venue but sadly that day there weren't any nearby, so I walked half way and scootered the rest. They're super fun and useful so I recommend you try them if you are visiting a city that has them. 🙂 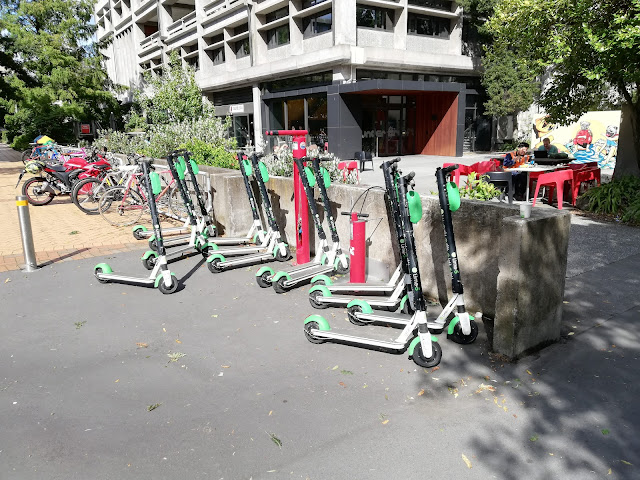 Posted by Robert Ancell at 10:49 am No comments:

My current job involves me mostly working in the upper layers of the desktop software stack however I started out working in what was then called embedded engineering but now would probably be know as the Internet of Things (IoT). I worked on a number of projects which normally involved taking some industrial equipment (radio infrastructure, camera control system) and adding a stripped down Linux kernel and an application.

While this was cutting edge at the time, there were a number of issues with this approach:
The above issues meant a large overhead building and maintaining the platform instead of spending that time and money on your application. If you wanted to make a hobby project it was going to be expensive.

But we live in exciting times! It's now possible to use cheap hardware and easily accessible software to make a robust IoT device. For around $USD60 you can make a highly capable device using Ubuntu Core and Raspberry Pi. I decided to make a device that showed a scrolling LED display, but there are many other sensors and output devices you could attach.

The Raspberry Pi 3 A+ is a good choice to build with. It was just recently released and is the same as the B+ variant but on a smaller board. This means you save some money and space but only lose some connectors that you can probably live without in an IoT device. 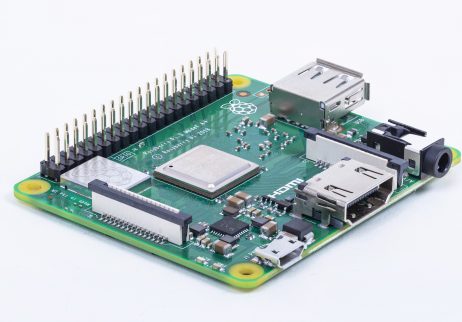 I added an SD card and for protection put it in a case. I chose an nice Ubuntu orange colour. 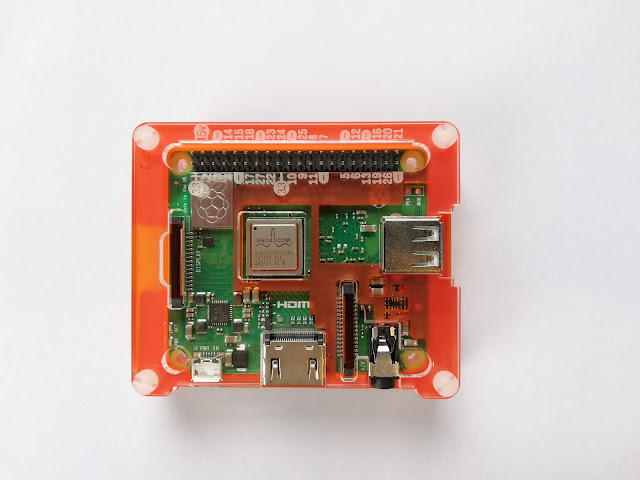 Next step was to connect up a display (also in Ubuntu orange). Note this didn't need the wires - it should fit flat onto the case but I spent too much time photographing the process that I accidentally soldered on the connector backwards. So don't make that mistake... 😕 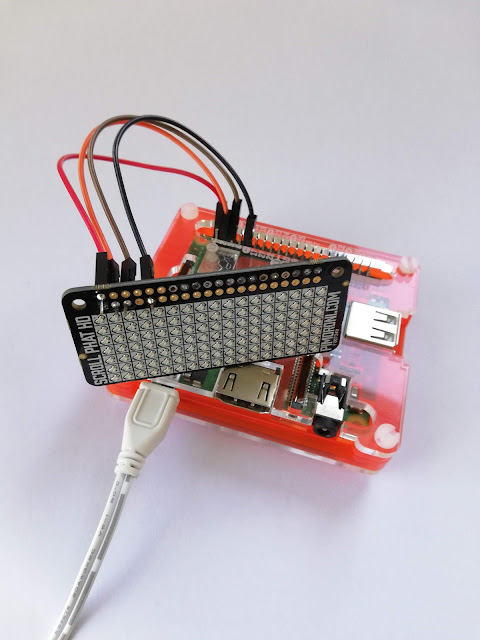 Final step was to connect a USB power supply (e.g. a phone charger). The hardware is complete, now for the software...

Using Ubuntu Core 18 is as simple as downloading a file and copying it onto the SD card. Then I put the SD card into the Raspberry Pi, powered it on and all I had to do was:
The last step is magically easy. If you connect a screen to the Pi it shows you the exact ssh command to type to log into it (i.e. you don't have to work out the IP address) and it uses the SSH key you have attached to your Ubuntu SSO account - no password necessary!

Now to write my application. I decided to write it in C so it would be fast and have very few dependencies. The easiest way to quickly develop was to cross-compile it on my Ubuntu laptop, then ssh the binary over the the Pi. This just required installing the appropriate compiler:

Once I was happy my application worked the next step was to package it to run on Ubuntu Core. Core doesn't use .deb packages, instead the whole system is built using Snaps.

All that is required to generate a snap is to fill out the following metadata (running snapcraft init creates the template for you):

This describes the following:
To test the package I built it on my laptop and installed the .snap file on the Raspberry Pi:


The last stage was to upload it to the Snap store. This required me to register the name (little-orange-display) and upload it:

And with that little-orange-display is in the store. If I wanted to make more devices I can by installing Ubuntu Core and enter the following on each device:


And that's the end of my little project. I spent very little time installing Ubuntu Core and doing the packaging and the majority of the time writing the app, so it solved the issues I would have traditionally encountered building a project like this.

Posted by Robert Ancell at 2:26 pm No comments: