We're getting a lot of bug reports flowing in for Gnome games. I try and knock off a few each weekend but progress is still slow. Most are coming from the automated reports from Feisty users.

So here's my top 3 bugs that need to be fixed asap:

We need your help!
Posted by Robert Ancell at 8:14 pm 2 comments:

I've now completed the Edgy->Feisty upgrade. I went to sleep at 1:30 am and continued this morning. I did an network upgrade and it took and estimated 5-6 hours. And the result is? I think I've gone slightly backwards.

(the keyboard configuration shows the correct layout though).

For me both the Edgy and Feisty upgrades have been disappointing for me. I have a Dell Inspiron 6000 which I think is fairly common and I hope support gets better if Dell starts distributing Linux!
Posted by Robert Ancell at 1:36 pm No comments:

..be back in four hours hopefully with 3D support again!
Posted by Robert Ancell at 11:53 pm 1 comment:

I've been running Google Analytics on the glChess homepage. Looking at statistics over this period shows the visitors are dominated by the French and Italian: 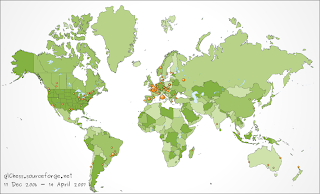 Are Europeans big chess players or big open-source users or both?
Posted by Robert Ancell at 7:52 pm 4 comments:

Xeyes in real life. Cool.
Posted by Robert Ancell at 1:28 pm No comments:

Seems glChess is now a sufficiently well know term to be included in spam poetry.


I don't know whether to be flattered or annoyed.

p.s. I found this from a feed from Google Blog Search - this is a great way to keep track on what people are saying about your project. Most people don't write to you, they just write about you...
Posted by Robert Ancell at 1:01 pm 1 comment:

So here it is: 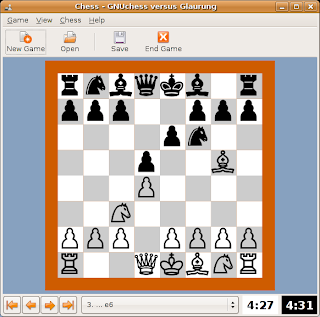 Yes, it has (simple) timed play support. It needs some cleaning up in the code but due to limited development time I thought it best to "release early".

Notice the navigation buttons are now on the left. I liked the symmetry of them on either side but as a user pointed out when you are in high resolution it takes too much mouse motion to move between them.

The other notable change is the 2D board now rotates and you can choose (from the menu) which side of the board to view.

These changes will be in the Gnome 2.20 release.

Enjoy!
Posted by Robert Ancell at 8:39 pm No comments:

In Gnome games we need more help to squash some bugs. I've been bogged down squashing Sudoku bugs which aren't too difficult - just time consuming. It's a great opportunity for you to get involved. I think it's hard to jump into development so here is a step by step entry guide to fixing bugs. Note the following instructions work fine for glChess too.

First install Gnome games. You can install this anywhere but I usually make a subversion directory:

Check out the development version:

This will get the software installed in /tmp, you might want to use ~/build or something similar instead.

For the above you will need the appropriate development tools installed. This will be distribution specific so unfortunately you're on your own here... If I remember which ones I installed on Ubuntu I'll state it here. Oh and on Ubuntu Edgy edit configure.in and change GNOME_PYTHON_DESKTOP_REQUIRED=2.17.3 to 2.16.0 because it works fine with the old (installable) version.

Now here's the cool part - because Sudoku is written in Python you don't need to recompile to make changes... What I do is edit the files in /tmp/lib/python2.4/site-packages/gnome-sudoku and run again. You can add print statements, make radical changes, whatever you like. And if things get too broken overwrite the install with another make install.

When you've fixed the change you need to make a patch to attach to a bug report. To do this you need to update the files in ~/svn/gnome-games. What I use is Meld:

Once you've got the changes merged into the checked out copy make a patch:

And send that in.

Don't worry about the patch being perfect, the developers who know the codebase better will look it over and modify/suggest changes to you. It may take time to get a response because we're all volunteers but we do appreciate the work - We need more help and you're the right person for the job! The first patch is always the hardest too :)