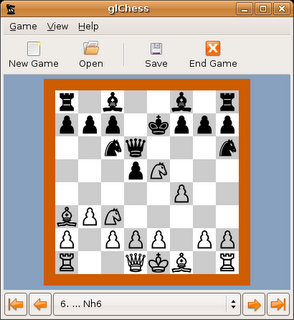 You can switch between 2D and 3D using the menu. Unfortunately the app still depends on OpenGL but in the next release it will disable the 3D option if OpenGL isn't present. These optional dependencies are going to create a testing issue - the plan is once 1.0 is present only make 1.0.x releases after a lot of testing using VMware player. More frequent but less tested releases will be released using 1.1.x.

This release also fixes a number of regression bugs. I have removed another accidental DBUS dependency and fixed the broken game saving. There are a number of changes to help in reporting bugs - the text output contains more useful information. The autosave feature should also work after exceptions are encountered.
Posted by Robert Ancell at 12:34 am

Which testing issue will come up, when OpenGL isn't present?

By having optional dependencies ideally all combinations should be tested. This can only be done with a pile of PCs or VMware images. It just takes a lot of time...

For instance the 0.9.9 release failed on systems that had previously run 0.9.8 - to test this properly I need to test a fresh install and an upgrade.